Firstly this is a rather long winded story but I had to write it out in such detail that those reading could understand my internal turmoil to appreciate my whole experience.

I had to fly to my Wellington head office today for meetings and had a pretty full on day. I was really looking forward to returning home but arrived to a chaotic scene at the airport boarding gates. Flights have been delayed due to bad weather and lots of passengers were queuing, waiting for the news.

The first announcement was that my flight has been delayed by 15 minutes. Well that’s not too bad I thought to myself, and went on to find my colleague who is booked on a later flight.

Next announcement came through and said that the inbound flight could not land and has been diverted! This means my flight has now been cancelled and I will have to rebook for a later available flight. I was told to proceed to the check-in counter and queue to do that. There are flights every 30 minutes for the next hour or two but lots of us are trying to do the same thing so I had better hurry.

As I ran down the stairs, a sudden thought flew into my head – ‘why not check if there are still seats on an earlier flight, which is still boarding because their inbound flight was delayed as well?’ I saw an airline staff and went up to him to enquire, he said he’ll let me jump the security check point queue and follow him to the gate to check how the flight’s looking. Another passenger was there too so the two of us stood there waiting anxiously. We got chatting and he said if there’s only one seat, I could go on first! That was so nice of him!

Minute by minute passed and we were still waiting for the last passengers to board to see if there were any seats left for us stand-byers. I kept praying that something will come up. My heart was absolutely pounding as I waited, and it dropped like a stone in the ocean when the last remaining passenger showed up after the door’s closed. The other passenger and I went ‘oh bugger’ – one of us will need to try and rebook.

The Air NZ staff had been so calm and collected throughout this – of course he had seen more of this than I had. In fact, this was my first flight cancellation!
He said don’t get too panicky yet….wait…and found two seats for us!! YIPPEE!!!

I got on, and ignored the looks of other passengers who might have thought I was a late boarder and was holding up the plane. The flight attendant looked at my hand written boarding pass, and said ‘oh 12 Alpha, somebody’s in it’ – WHAT????
Amazingly it was just a case of wrong seat and so I quickly made my way to my seat.

It took us a while to taxi out and waited in a plane queue for 15 minutes further. When it was our turn to take off, I couldn’t help but look out through the window. I had to see how bad the weather was.

As we climbed, our plane went through thick misty clouds that were so low no wonder planes couldn’t land. The moment our plane cut through the dark rain clouds, I saw a rainbow.
At that exact moment, I hear His voice saying ‘This is my covenant with you, remember? I will always look after you.’ Tears.

Next thing I saw was the bluest sky and brightest sun I have seen for days. Amazing!
See even when we are surrounded by darkness, misery, uncertainties, unhappiness, we need to remember that there is warmth and hope just beyond, all we need is to have faith and reach out to Him!

Ps. I later found out that the plane I got on was the last one out of Wellington for the night. So had I not listened to that voice and did what everybody else is doing (rebooking at the counter for a later flight) I would not have returned when I needed to. 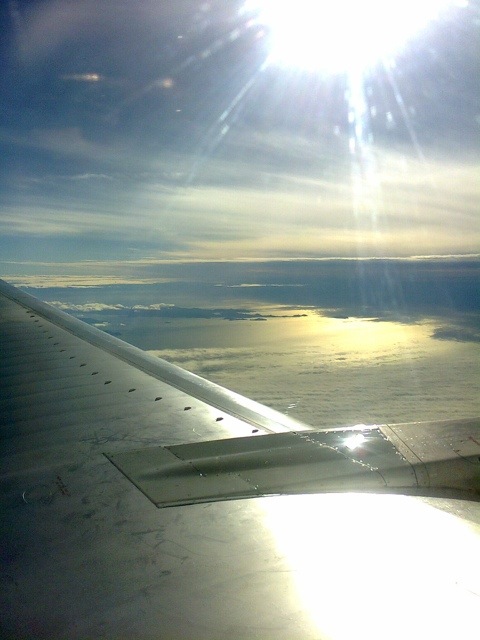