A hundred young chickens? Or a new species of chicken called ‘hundred flower’ that is being cooked here? Don’t be fooled. I’ll let you in on a secret: There is no chicken in this except the skin and the hero of the dish is prawn actually.
I’m sure if you google this you will find some mythical story behind the birth of this dish, involving some ancient Chinese palace kitchen maid who was forced to create something for the king who has demanded a new dish or else heads will roll. Said maid thought long and hard and came up with such a dish – crispy on the outside and springy on the inside. King loved it and everyone was saved. The End. Anyway they all seem to have similar stories like that.
This isn’t one of those recipes that then passed from the palace kitchen to the general populace, from one generation to another in the family home. At least not to our family home. It was a case of ‘wow that’s an expensive dish! Should we try to make it at home with ingredients on hand?’
My mum went about trying it and it became one of those special dishes we do for special occasions or guests. I’ve simplified it a bit here by removing the crushed cashews – they just burn too easily and I reckon I could save on the calories for dessert instead!

Drain excess water from prawns and tip them onto a chopping board.
Stand tall, roll your shoulders back and prepare yourself (well your arms at least) for a good workout. Using first 1 knife chop the cutlets small. Best to use a chefy technique where you hold the tip of the knife down with your left hand while moving the blade up and down with your right.

When they have been all chopped, proceed to use two knives to give the prawn meat a good hammering. This is also good for your mind as you channel all your negative energy into moving your arms and mincing the prawns. 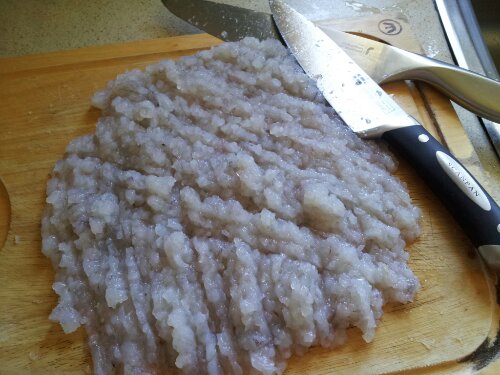 Scrape the flattened prawn meat into a heap and give it another hammering.

Repeat for a few times until you feel calm and all zen-like. I would suggest 4-5 times is enough. If not, you may benefit from some kick boxing classes!!

Put the prawn meat into a bowl and add the marinade in. Give it a few crazy stirs and when your arms are tired, leave it for 10 minutes.

Dry the chicken skin and pat a good amount of cornflour on the inside of the skin, covering it all over.

Using a large soup spoon, smear the prawn meat onto the chicken skin. Smooth it down and even. Now you have a large pattie.

Heat the pan up and add a tiny teaspoon of oil. When it is hot, place the pattie in, skin side down. 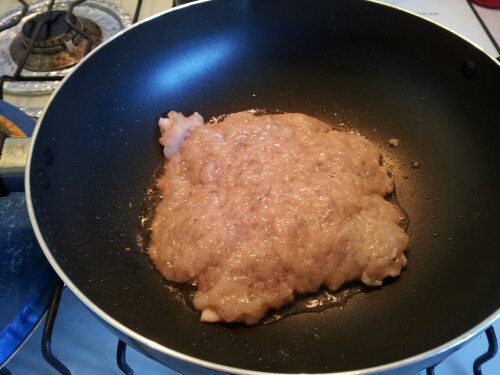 Pan fry for 1 minute on high and then 2 minutes on medium, till golden. Turn over and fry for another 3 minutes. Watch it to make sure it doesn’t burn. 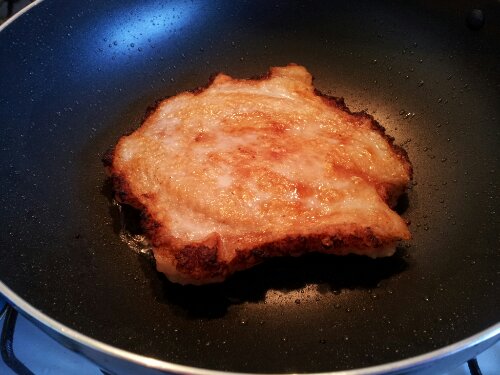 Remove from pan and cool on some kitchen paper. (the edges look a bit dark and it is really just the lighting!)

Slice and plate up.

Served here with some magic sauce – better known to most children as tomato sauce.
Wish you all a joyful and bountiful year of the Snake! (like what I did with the sauce squiggle?)

Ps. If I ever have the guts to apply for a spot in Masterchef, this would be my audition dish!!