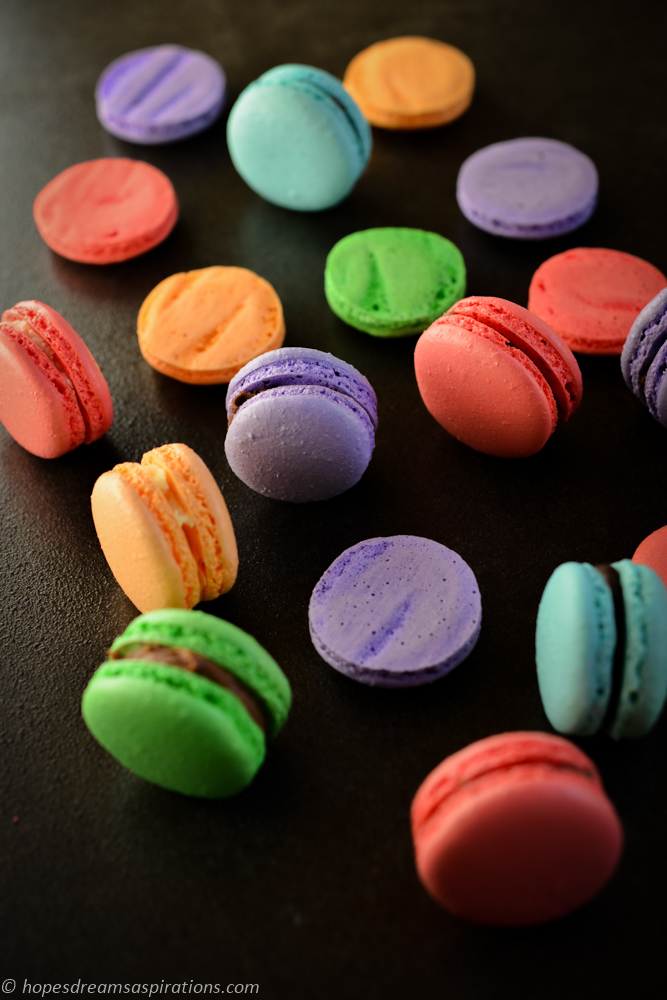 We’ve been to the Auckland Observatory recently and inspired by the show about our solar system – “The little star that could” – I went on to create a kaleidoscopic array of macarons, to reflect the colours of our stars and planets.
These sat on a 3-tier glass cake plate, alongside the star cake for J’s birthday party. 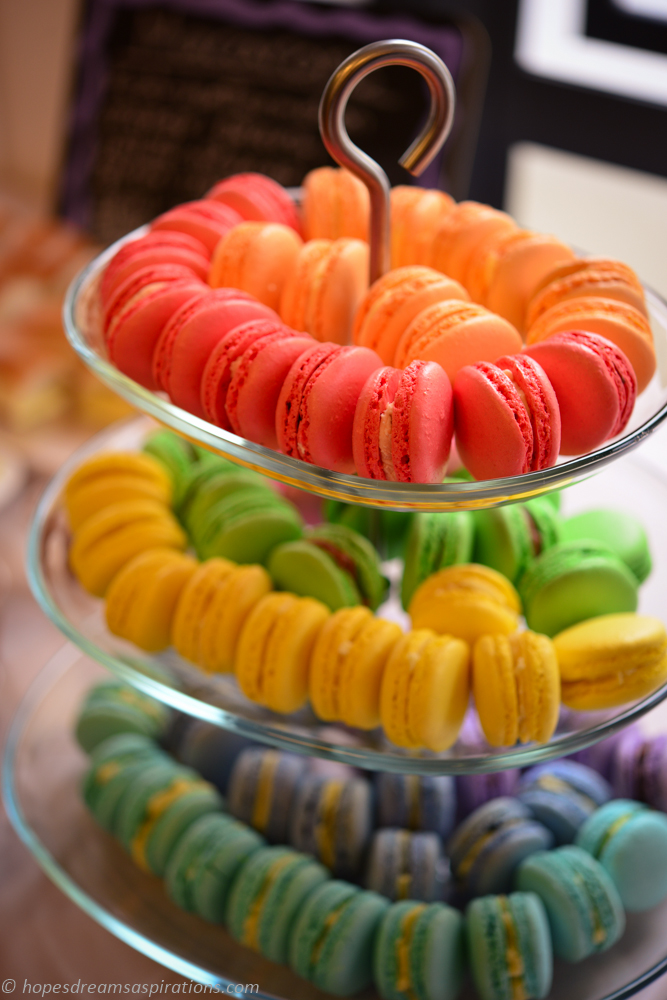 The result was well worth the effort, but I must admit to taking some short cuts to lighten the load of doing 7 colours!
So instead of adding the gel colourings in with the sugar syrup, like I normally would, I made a single batch of white macaron mixture, divided the mixture up to 4 equal portions, before adding individual gel colourings. I repeated this to make another 4 colours (yes I ended up making 8 colours in total).
The following recipe will give you about 80 small filled macarons in total, about 20 for each colour.

Sift the almond meal and icing sugar, set aside in a large wide bowl.

Put the first lot of egg whites into your stand mixer.

Clip the sugar thermometer according to manufacturer’s instructions to a milk saucepan, put the water and caster sugar in and dissolve the sugar over a low heat. Leave it to heat up and don’t stir it.

Cook the sugar syrup until it reaches 70°C. You should monitor your sugar thermometer, and as it reaches this temperature, add the meringue powder to the egg whites and whisk in medium speed until it becomes frothy.

Once the sugar syrup has reached 118°C (soft ball stage), take the saucepan off the heat, keep the mixer speed on medium and slowly trickle the sugar syrup in, down the side of the bowl. (Be warned not to get the syrup onto the whisk as you will then have spun sugar.) Increase speed to high and whisk until the bowl is warm to touch, about 8 minutes.

Add the second lot of egg whites to the almond meal mix, then add the meringue and use a large spatula to thoroughly combine it. Continue mixing the mixture to soften the meringue. Don’t be afraid to slap the mixture down.To achieve “macaronnage”, I mixed the batter about 25 times. Don’t over do this.

Divide equal portions of the mixture into smaller bowls and add drops of colourings in. Mix slightly only to combine. 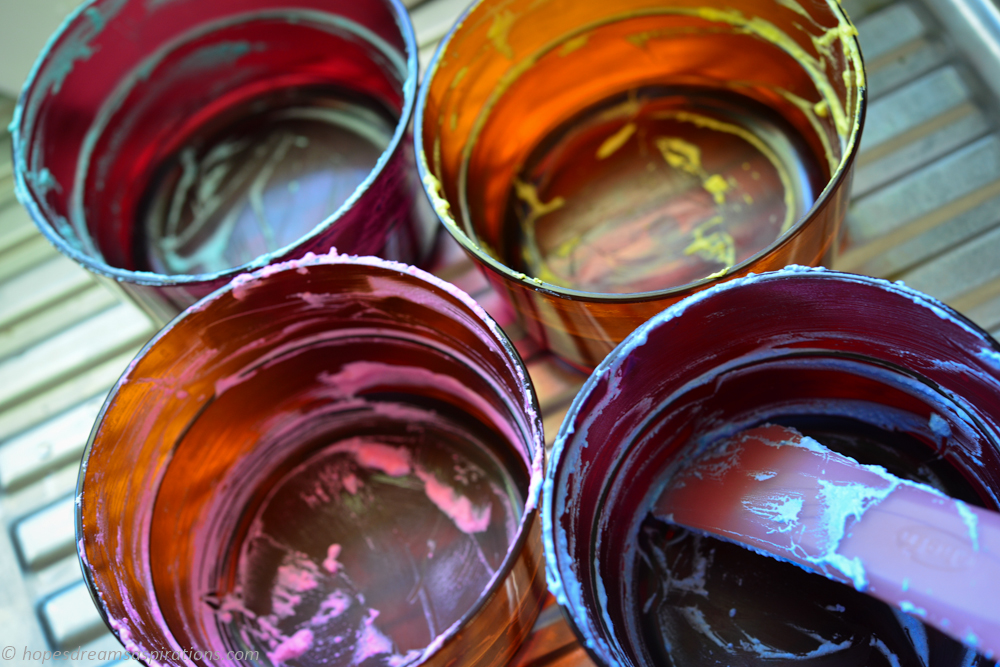 Scoop into a piping bag fitted with a #12 Wilton tip, and pipe. To get even rounds, hold the piping bag above the baking sheet, with the tip at a 45 degree angle. Squeeze the mixture in the centre of the rounds and as it is close to filling the circle, stop squeezing and flick the tip from three o’clock to 6 o’clock. This ensures a smooth top. 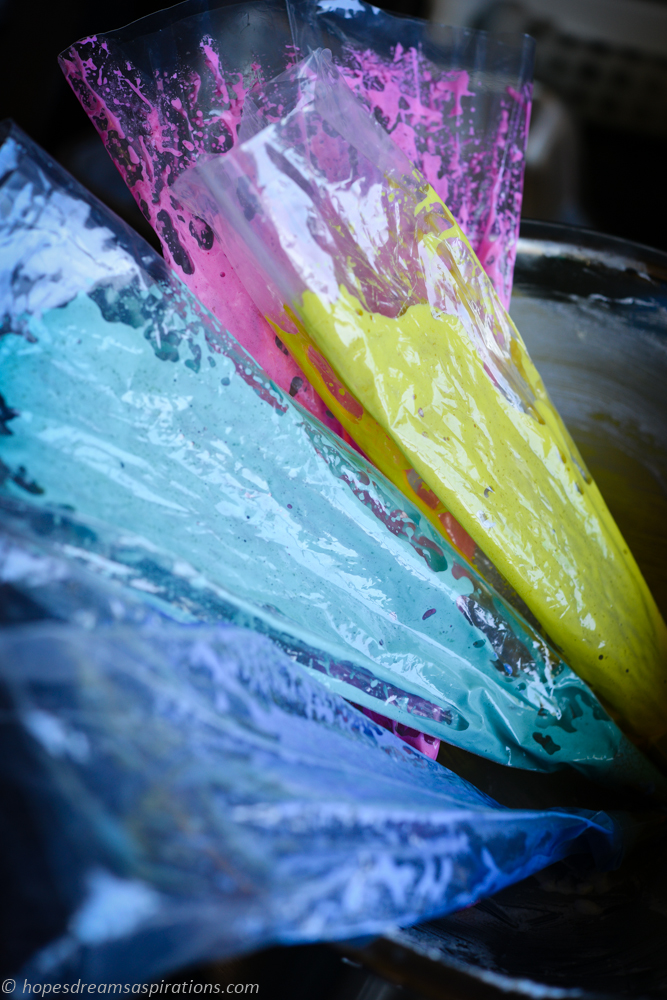 Allow 30 minutes for a skin to be formed.

Fan-bake them at 125°C, for 20 minutes. After a few minutes in the oven, you should see them rising nicely. 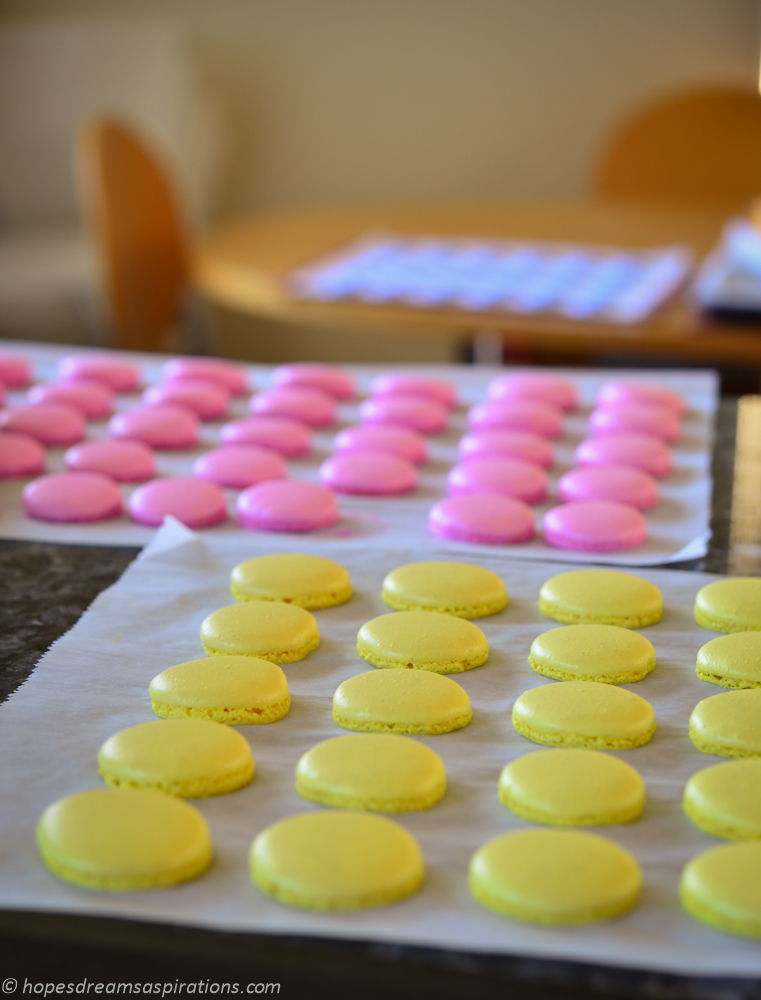 Once out of the oven, the macarons were left for 2 minutes on its trays before I checked them. They should peel off the baking paper quite easily. Slide the whole sheet off the baking sheet onto a cool counter top. This causes a thermal shock and will make it even easier to peel off.

I paired these with either flavoured chocolate or natural flavouring oils – added into the chocolate ganache.

Tips: take your time! Don’t rush the drying time – if after 30 minutes the top of the shells are still wet/sticky to the touch, the skin hasn’t formed properly. If baked now there is a good chance it won’t rise perfectly. Give it more time, go do something else and come back. If you really had to, make sure you don’t rush the next step which is to bake. The temperature I use is lower than other recipes and the time is longer too. This is what I’ve found to work best for me, using MY oven. Tweak this if your shells are cracking, not rising or rises too little.

Break up chocolate into small chunks. Bring cream up to a boil in a pan, and pour over the chocolate. Let it sit for a minute before stirring. Add butter and stir to melt. Let it cool a little, add your selected flavouring into the bowl and let it thicken in the fridge. 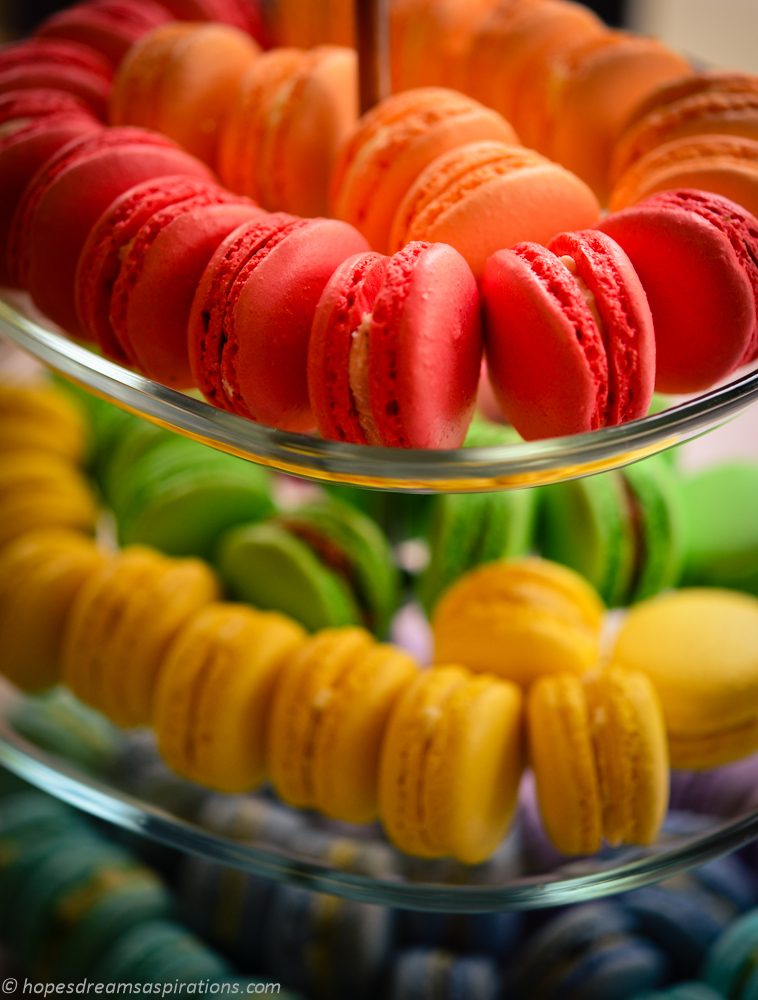 The filled macarons need to be kept in the fridge for 24 hours for the filling to flavour the shells!