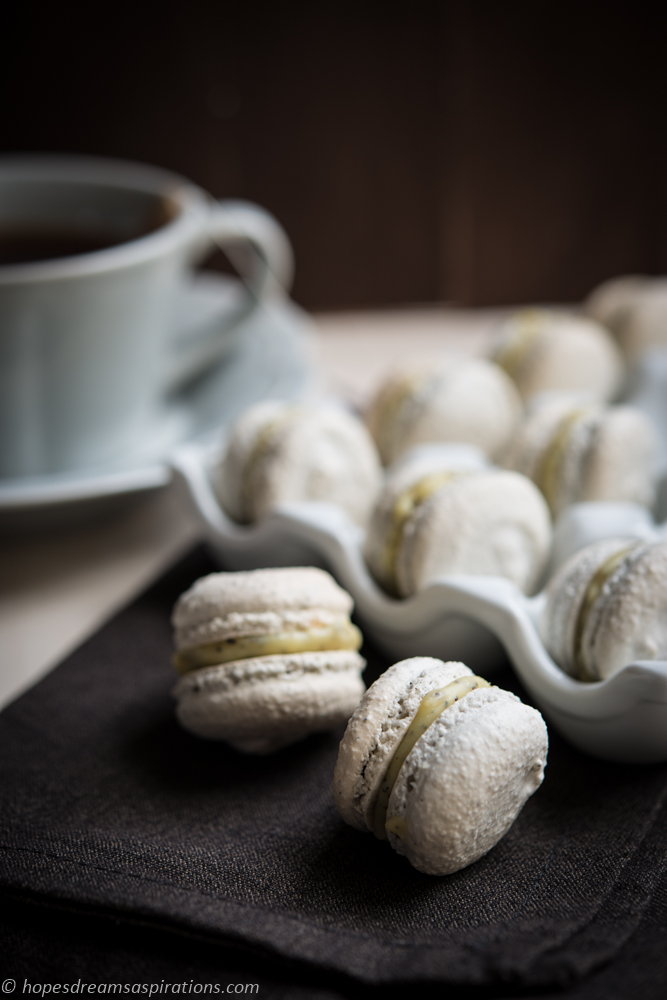 Finally I held my first macaron class this weekend!

After sampling my macarons at a gathering last week, a few of my friends asked for a class and as the saying goes ‘Strike while the iron is hot’ we organised for a class straight away.

While we did some of my usual flavours, like coffee and raspberry, we also tried making Earl Grey tea macarons. 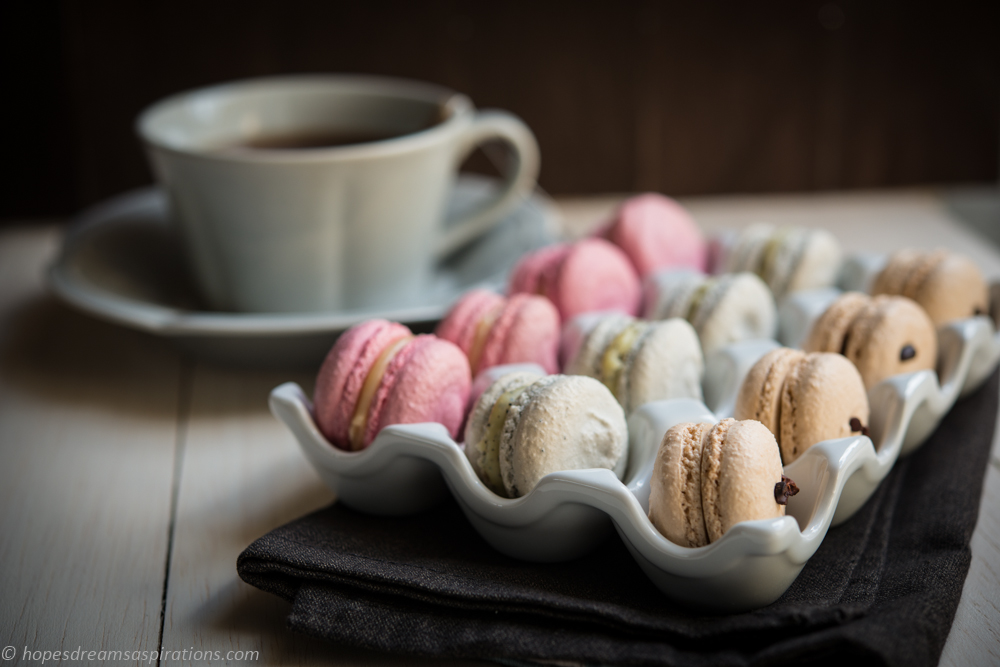 I’ve never been a fan of Earl Grey tea – my earlier memory of this tea was that of a bitter, overpowering flavour that I grew an instant dislike after a first sip.

Nevertheless we gave this a try. I decided to flavour both the shells and the filling by adding the crushed leaves from a Dilmah Strong Earl Grey tea bag, half into the shell mixture and half into the white chocolate ganache.

White chocolate was also chosen over dark chocolate as the latter could overwhelm the tea flavour.

I was pleasantly surprised by the subtlety of this flavour pairing and even tried a cup of Earl Grey with it – now I wouldn’t mind having this with a few macarons for afternoon tea! This little experiment had completely turned my head around Earl Grey. I think the key is to watch your brewing time – follow the suggested brewing instructions and the flavour should be very smooth and palate-pleasing. I hope you enjoy it as much as I do. 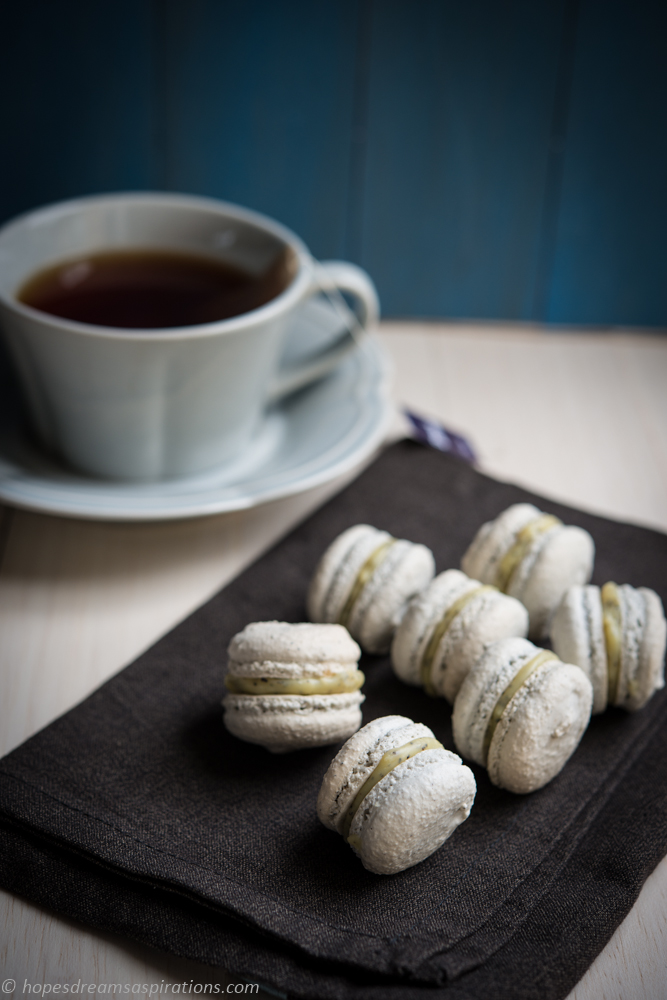 Sift the almond meal and icing sugar, set aside in a large wide bowl.

Put the first lot of egg whites into your stand mixer.

Clip the sugar thermometer according to manufacturer’s instructions to a milk saucepan, put the water and caster sugar in and dissolve the sugar over a low heat. Leave it to heat up and don’t stir it.

Cook the sugar syrup until it reaches 70°C. You should monitor your sugar thermometer, and as it reaches this temperature, add your gel colourings add the meringue powder to the egg whites and whisk in medium speed until it becomes frothy.

Once the sugar syrup has reached 118°C (soft ball stage), take the saucepan off the heat, keep the mixer speed on medium and slowly trickle the sugar syrup in, down the side of the bowl. (Be warned not to get the syrup onto the whisk as you will then have spun sugar.) Increase speed to high and whisk until the bowl is warm to touch, about 8 minutes.

Add the second lot of egg whites to the almond meal mix, then add the meringue and use a large spatula to thoroughly combine it. Continue mixing the mixture to soften the meringue. Don’t be afraid to slap the mixture down.To achieve “macaronnage”, I mixed the batter about 25 times. Don’t over do this.

Add the tea leaves in and give it a quick light mix.

Scoop half into a piping bag fitted with a #12 Wilton tip, and pipe. To get even rounds, hold the piping bag above the baking sheet, with the tip at a 45 degree angle. Squeeze the mixture in the centre of the rounds and as it is close to filling the circle, stop squeezing and flick the tip from three o’clock to 6 o’clock. This ensures a smooth top.

Allow 30 minutes for a skin to be formed.

Fan-bake them at 125°C, for 18 minutes. After a few minutes in the oven, you should see them rising nicely.

Once out of the oven, the macarons were left for 2 minutes on its trays before I checked them. They should peel off the baking paper quite easily. Slide the whole sheet off the baking sheet onto a cool counter top. This causes a thermal shock and will make it even easier to peel off.

Break up chocolate into small chunks. Bring cream up to a boil in a pan, and pour over the chocolate. Let it sit for a minute before stirring. Let it cool and let it thicken in the fridge. Add the tea leaves.

The filled macarons need to be kept in the fridge for 24 hours for the filling to flavour the shells, so don’t eat it yet! These freeze well (up to 3 months). 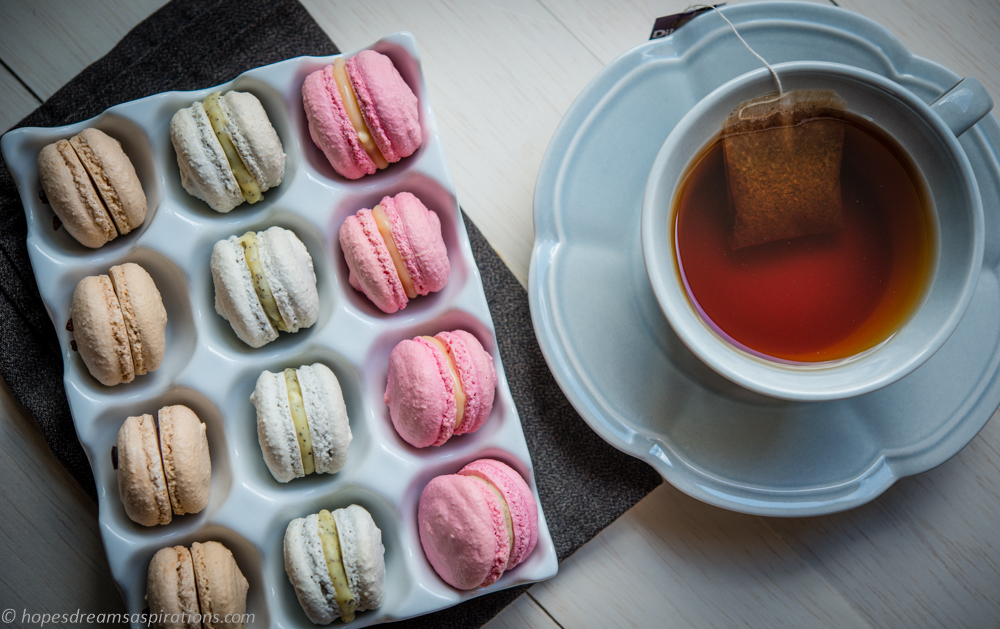